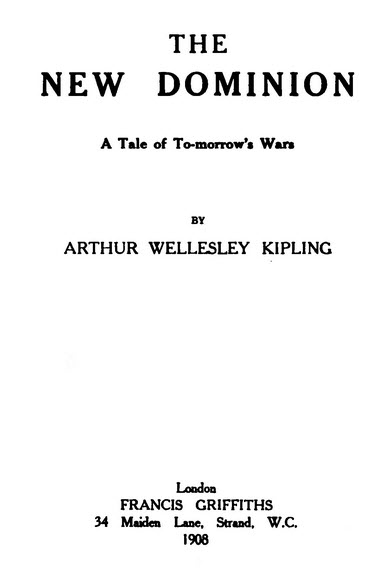 The New Dominion: A Tale of Tomorrow’s War (1908), a Yellow Peril tale, pits the USA triumphantly against Japan and Germany, with the help of Great Britain. [SFE]

A few words are necessary to explain the object of this book. It was inspired by the “war scare” at the time of the difference with Japan over the San Francisco Schools. Its object is to show the power of the American Navy even in its present state, and to point the dangers by which we may someday be beset.

The Navy of a country is essentially a police organization. That is to say that it is designed to keep the peace ,not to break it. The stronger and the better organized and equipped the police force of a city may be, the fewer are the murders, robberies and disorders to chronicled. The greater, better organized and better manned a Navy may be, the less numerous will be the attempts to force its owners into war.

For over a century England has been the undisputed mistress of the seas and, barring the “little unpleasantness” of 1812-14 and the wars of Napoleon, no one has dared to challenge her sovereignty. As a result, practically all her wars since that period have been land campaigns, no State possessing a Navy daring to risk it in a struggle with the redoubtable “handy man”.

In this book a feeble attempt has been made to portray war as it is, and as it will be: although all the details are not, perhaps, absolutely accurate.

Two things in particular we have attempted to show: (1) The strength of the United States as compared with that of Japan; (2) the terrific, world-shaking power that would be up by the combination of the two great Anglo—Saxon nations, England and the United States.