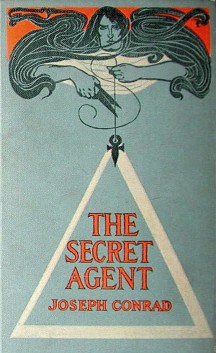 The Secret Agent: A Simple Tale is a novel by Joseph Conrad published in 1907. The story is set in London in 1886 and deals largely with the life of Mr. Verloc and his job as a spy. The Secret Agent is also notable as it is one of Conrad’s later political novels, which move away from his typical tales of seafaring. The novel deals broadly with the notions of anarchism, espionage, and terrorism. It portrays anarchist or revolutionary groups before many of the social uprisings of the twentieth century. However, it also deals with exploitation, particularly with regard to Verloc’s relationship with his brother-in-law Stevie. [Wikipedia]

”The Secret Agent,” Joseph Conrad’s 1907 novel about an anarchist plot to blow up the Royal Observatory at Greenwich — in fact, a scheme by a secret police agent to stir up a government backlash — has acquired a kind of cult status as the classic novel for the post-9/11 age. Conrad’s villain, the Professor, who never goes out without a glass vial of high explosives in his breast pocket and a detonator in his palm, has been taken to be a prescient portrait of the terrorists who menace our own world.  [NY Times (2007) http://www.nytimes.com/2005/09/11/books/review/11reiss.html?pagewanted=all&_r=0]

There is a good summary at: http://www.gradesaver.com/the-secret-agent/wikipedia/plot-summary/

Propaganda by Deed: the Greenwich Observatory Bomb of 1894. The Royal Observatory in Greenwich Park, London was subject to an anarchist bomb attack in 1894: this was possibly the first ‘international terrorist’ incident in Britain. The incident was immortalised by Joseph Conrad in his novel The Secret Agent. This article draws on manuscript notes of the event made by staff members, held in the Royal Greenwich Observatory Archives, as well as contemporary newspaper accounts. [Royal Museums Greenwich (2014) http://www.rmg.co.uk/explore/astronomy-and-time/astronomy-facts/history/propaganda-by-deed-the-greenwich-observatory-bomb-of-1894]

There is a review of Conrad and his works in the Guardian (2007) at: http://www.theguardian.com/books/2007/dec/01/classics.josephconrad