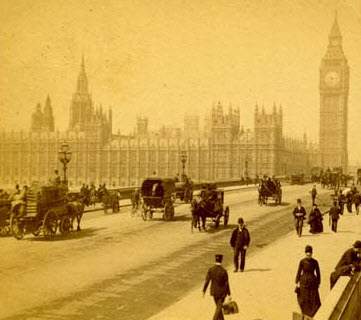 In Walter Wood’s The Enemy in our Midst (1906) there is a `German Committee of Secret Preparations’ covertly laying the foundation for a putsch in London. [Niall Ferguson, The Pity of War].

The idea of an foreign army in hiding in England also appears in Louis Tracy’s The Invasion.

Extract: It was Captain Mahler who spoke; and, as he uttered the words, the weals on his face once more became livid. He spoke confidently, for he knew that he was in a dwelling which was as safe a gathering-place as any which could have been found in London. There were no police to watch their movements, no detectives to ferret out their objects. Even they, in a free country, aliens all, were as untrammelled as if they had been the native-born Englishman whom it was their deliberate purpose to supplant.

‘And when will London be ready for the death-wound?’ asked a dark, silent man, named Captain Roon.

‘She is ready now. At last!’ replied Mahler. ‘And could there be a better beginning than this riot?’ There was a gleam of exultation in his eyes. ‘Listen,’ he continued, passionately, ‘we have reached the culmination of the work which we have been doing since the glorious and victorious war with France. Until then, we were satisfied to be a leading Power amongst the Continental nations! But we have changed all that! We must be a great Colonial Power, and we can do it only by taking the place of Great Britain! We have done well in Asia Minor and Brazil; with better fortune we could have had South Africa. If we did not succeed it was not for want of planting poison! We have increased our wealth enormously, and our population is rapidly becoming too large for Germany. There must be an outlet for our surplus riches and people—and the outlet is in the Empire in whose capital we stand. And only here! There is no other way!’

‘What of the British Army?’ asked Roon. Mahler laughed contemptuously.

‘The British Army!’ he exclaimed. ‘Has it not been damned repeatedly out of the mouths of its own rulers? Was not the truth revealed by South Africa?’

‘It won in the end,’ observed Roon, gravely.

‘But only against a handful of farmers!’ declared Mahler.

‘England’s forces could not meet and fight a Power of equal military strength. They would be destroyed.”