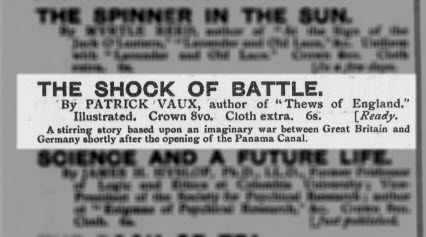 This is a story of modern warfare, rapid and telling in its style, and full of effective action. The writer has produced not only a successful narrative, but a number Of vigorous descriptions, excellent in themselves and contributing to the tensity of the situations. A war between Great Britain and Germany, supposed to take place after the opening of the Panama Canal, serves as an opportunity to develop the horrible scenes of a twentieth-century conflict. Political causes are merely touched upon, and the author confines himself to the presentation Of the actual battles, in which even the trained and scientific fighters of this century fall back to a certain degree upon their primal instincts. This record Of a naval battle abounds in pictures so revolting and at the same time so realistic that it brings home once more the terrible discrepancy between the methods of modern warfare and the ideals of our civilization. (The Shock of Battle. By Patrick Vaux. G. P. Putnam’s Sons. New York. $1.50.)  [The Outlook, September 8, 1906, p. 92]

The Shock of Battle. By Patrick Vaux. New York: G. P. Putnam’s Sons. Mr. Vaux, the title-page informs us, is the author of “Thews or England.” We have not read that work, but there is ample evidence before us as to what Its character would have been. Like the present story, no doubt,.. it suggested an advance upon the swashbuckling romance comparable to the advance of the motor ear upon the bicycle. The romancer speaks in terms of battleships, and flings squadron against squadron with the ease of a chess player. He is, withal, a ruthless god of the Machine, preferring open slaughter to hair-breadth escapes, and by no means grudging of gory detail. He writes as a war correspondent who, being the inventor of his war, is naturally omnipresent and omniscient: and the journalist whom he uses as spokesman is rather a pale phantom. For the rest, Mr. Vaux is an enthusiastic “rooter” for England, in the imagined contingency, shortly to be faced, of war with Germany. He paints the Germans as treacherous brutes, and, if not poltroons, hopeless blunderers. He sweeps them from the sea With much promptness and fortitude. He writes with animation and vividness. As piece of imaginative journalism the book may rank about with Mr. Wells’s  prophetic flights. [The Nation, September 13, 1906, p. 228]

‘The Shock of Baffle,” by Patrick Vaux, describes prophetically the incidents of a war ten years hence between Great Britain and Germany. is a much less depressing book than that which Mr. Le Queux recently gave to the world: for although deploring the apathy in Britain which had allowed Germany to gain a preponderance in modern warships, and permitted British vessels to become manned by foreign seamen, the author retains his faith in our heritage of nautical sprit derived from generations of sea kings. The opening incident of the war is the seizure of a British merchant steamer by a German second officer and a number of seamen who had shipped with that intention in anticipation of the outbreak of war. A duel between a British and a more powerful German cruiser follows, in which the victory is won by dash and seamanship against superior armament, is described with spirit rather than with attention to the technical details of naval tactics. The scene is carried to British possessions in the West Indies, which have obtained revived prosperity and importance through the opening of the Panama Canal and the operation of British reciprocal duties. Some gallant exploits performed on this scene of action. Finally. the fruits of German diplomacy are found in a United Europe Against the Kaiser’s ambition; and with fleets swept from the seas and territories invaded by France and Austria, Germany is compelled to sue for peace. The book is published by G. P. Putnam’s Sons, New York and London. [Auckland Star, Volume XXXVII, Issue 263, 10 November 1906, Page 10]