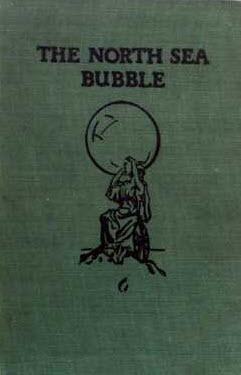 Ernest Oldmeadow (1906) The North Sea Bubble: A Fantasia
A post “Battle of Dorking” spoof.
Ernest Oldmeadow’s earlier North Sea Bubble (1906) also imagined the Germans wooing their new vassals with universal Christmas gifts and subsidised food. Indeed, the worst atrocities inflicted by the occupiers in Oldmeadow’s German Britain are the introduction of a diet of sausages and sauerkraut, the correct spelling of Handel’s name in concert programmes and Home Rule for Ireland.[Niall Ferguson (1999) Pity of War]
Up to 1906 these writers had told their stories as they had happened: then Ernest Oldmeadow changed the point of view in The North Sea Bubble by cutting out the preliminaries and coming directly to the consequences. …….. The invasion has long since finished. The United Kingdom is part of the Reich. and a German Statthalter rules in London. [I.F. Clarke (1997) The Great War with Germany, 1890-1914]
Extract:

THE GERMAN CONQUEST OF GREAT BRITAINBy the middle of December 1910, the German conquest of Great Britain was practically complete. The execution of the Mayor of Birmingham and the deportation to Heligoland of all politicians tainted with Imperialist opinions had not been without effect. Even Warwickshire and Kent lay sullenly quiet at last under the heel of martial law.So far, Ireland had been left alone. Europe rightly guessed that motives of high politics rather than military considerations accounted for German inaction on the western shores of St George’s Channel. It was the secret intention of the Imperial Chancellor to give Ireland a liberal measure of Home Rule and to restore the Parliament on College Green, reserving to Berlin little more than the control of Ireland’s armed forces and foreign relations. The sane and well-informed testimony of Knubsen (who, as Norwegian Minister at Berlin, had access to the truth at its fountainhead) is conclusive on this point. He writes:The Imperial Chancellor was determined not to repeat the blunder of 1871. Stricken to the dust and bleeding at every pore, it seemed in that year, both to herself and to the world, that France must be powerless for a generation, or at least until the German Empire had obtained so long a lead that France could never hope to overtake her. Yet, in a few years, the indemnity was paid, and the Republic could count on armies incomparably superior to the ill-fated legions which had followed Louis Napoleon ‘å Berlin’, only to find their graves at Sedan.

Among the devices whereby the Chancellor intended to frustrate the regeneration of England as a first-class power was the granting of autonomy to Ireland under German suzerainty. At one stroke he would thus rid himself of Ireland’s perilous domestic politics during the years of occupation. and, at the same time, he would plant a perpetual menace on England’s western flank. With Belgium and Holland practically in German hands, England would lie like a filbert in a pair of nut-crackers.