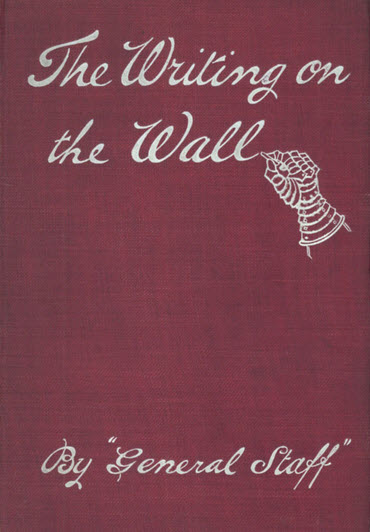 The author was Major-General Thomas Picher.

Presented as an excerpt of a history book from 1915 recounting the events of a successful German attack on Britain in 1908 and the ensuing war that involved also France, Austria and Russia.

The object of this work is to call the attention of the public to the absolute unpreparedness of our land forces for the tasks which they may be called upon to perform.

The ‘history’ ends with a detailed description of the reforms that were enacted in Britain to prevent any future such disasters.

In 1906, Pilcher had also published an anonymous invasion novel, The Writing on the Wall, which described a German invasion of Britain. The war he theorised was an invasion by Germany followed by a rapid collapse of the British forces, particularly the volunteers, which he saw as unfit for purpose; he advocated a form of conscription and a mandatory reserve system to strengthen the Army. The Spectator was dismissive, comparing the novel unfavourably to The Invasion of 1910 (“many useful hints are given as to practical lessons … [but] the general plot entirely destroys any value it might otherwise possess”) and noting that the suggestions were “highly typical”, but that it was counterproductive to simply malign the Army and encourage the country to adopt German military policies. It was translated and published in Germany the same year, as Mene Mene Tekel Upharsin: Englands überwältigung durch Deutschland. [Wikipedia]

In the ‘version which finds favour with “General Staff,” however, we have not the fortitude to see our capital destroyed. We pay an indemnity of £500,000,000, and sign an agreement to give the invaders a safe conduct back to Germany, and not to reopen hostilities for another twelve months. No sooner has Germany recovered her Army of England than she declares war on France and defeats her, and then proceeds to annex Denmark, Holland, and the Netherlands; after which she takes advantage of the death of the Emperor of Austria’ to swallow all the’ German-speaking portions of that Empire. The immense strength of the German Navy in 1913, and the advantages of her new harbours in the newly acquired territories entirely preclude us from attempting a revenge. Learning wisdom at last-from our disasters, we determine to reconstruct “a modern army on modern lines, with universal service as its basis.”  [Spectator 29th September 1906]

The book was published in a German edition in the same year.