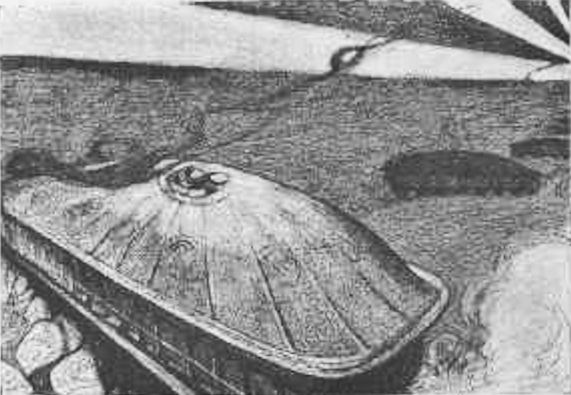 “The Land Ironclads” is a short story by H.G. Wells that originally appeared in the December 1903 issue of the Strand Magazine. It features “land ironclads,” 100-foot-long (30 m) machines that are equipped with remote-controlled guns and that carry riflemen, engineers, and a captain. (The term “ironclad” was coined in the mid-19th century for steam-propelled warships protected by iron or steel armour plates.) The land ironclads are described as “essentially long, narrow, and very strong steel frameworks carrying the engines, and borne on eight pairs of big pedrail wheels, each about ten feet in diameter, each a driving wheel and set upon long axles free to swivel around a common axis. . . . the captain . . . had look-out points at small ports all round the upper edge of the adjustable skirt of twelve-inch ironplating which protected the whole affair, and . . . could also raise or depress a conning-tower set above the port-holes through the center of the iron top cover.” Riflemen are installed in cabins “slung along the sides of and behind and before the great main framework,” and operate mechanically targeting automatic rifles. The story contributed to Wells’s reputation as a “prophet of the future” when tanks first appeared on the battlefield in 1916. For contemporaries, Wells’s rather sketchy battle between countrymen “defenders” (who rely on cavalry and entrenched infantry) and attacking townsmen carried echoes of the Boer War, as well as of his 1898 novel The War of the Worlds, which also featured a struggle between technologically uneven protagonists.[Wikipedia]

The story opens with an unnamed war correspondent and a young lieutenant surveying the calm of the battlefield and reflecting upon the war between two unidentified armies. The opponents are dug into trenches, each waiting for the other to attack, and the men on the war correspondent’s side are confident they will prevail, because they are all strong outdoor-types —men who know how to use a rifle and fight—while their enemies are townspeople,”a crowd of devitalised townsmen . . . They’re clerks, they’re factory hands, they’re students, they’re civilised men. They can write, they can talk, they can make and do all sorts of things, but they’re poor amateurs at war”. The men agree that their “open air life” produces men better suited to war than their opponents’ “decent civilization.”

In the end, however, the “decent civilization,” with its men of science and engineers, triumphs over the “better soldiers” who, instead of developing land ironclads of their own, had been practising shooting their rifles from horseback, a tactic rendered obsolete by the land ironclads. Wells foreshadows this eventual outcome in the conversation of the two men in the first part, when the correspondent tells the lieutenant “Civilization has science, you know, it invented and it made the rifles and guns and things you use.”

The story ends with the entire army captured by fourteen land ironclads, only one of which has been disabled by the defenders. In the last scene, the correspondent compares his countrymen’s “sturdy proportions with those of their lightly built captors”, and thinks of the story he is going to write about the experience, noting both that the captured officers are thinking of ways they will defeat what they call the enemy’s “ironmongery” with their already-existing weaponry, rather than developing their own land ironclads to counter the new threat, and also noting that the “half-dozen comparatively slender young men in blue pajamas who were standing about their victorious land ironclad, drinking coffee and eating biscuits, had also in their eyes and carriage something not altogether degraded below the level of a man.”