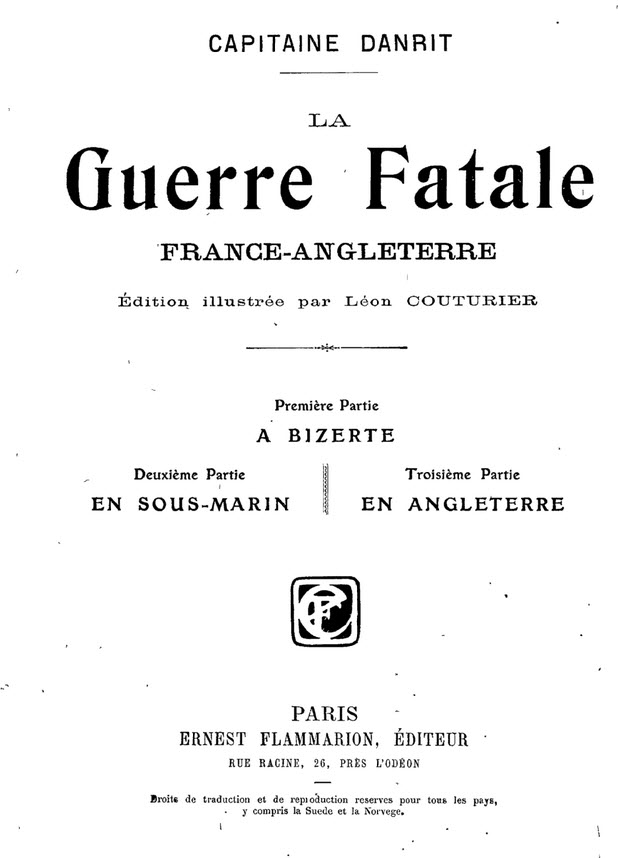 In 1888 Driant began writing his first guerre imaginaire (“imaginary war”) novel, which he was to publish using the pseudonym “Capitaine Danrit”. This was La Guerre de demain (“The War of Tomorrow”), comprising three stories which told the tale of: La Guerre en forteresse (“Fortress Warfare”), La Guerre en rase campagne (“War in Open Country”), and La Guerre en ballon (“Balloon Warfare”). The action begins with La Guerre en fortresse, as reports arrive of a surprise German attack upon France. Driant gave his readers heroic episodes, great victories over the Germans, and in the 1192 pages of his Guerre fatale: France-Angleterre (“The Fatal War: France-England”, 1902), the total defeat of the British by the French. [Wikipedia]

In La guerre fatale: France-Angleterre the French military writer, Capitaine Danrit, described a swift invasion and conquest of the United Kingdom. With a band playing Sidi Brahim and to the cry of En avant! la garde du drapeau, the men of a crack Chasseur regiment storm ashore at Deal. The rest of the tale goes off with the enviable celerity of a staff exercise. The British defence crumbles before the ferocity of the French attacks and London falls within weeks of the first landings. The point of all this appears in the author’s conclusion at the end of La guerre fatale. His intention had been to show that, “although the ancient enemy of France pursues an admirably conducted policy and is unusually daring, nevertheless Britain is really a colossus with feet of clay. Up to now she has imposed on the world by her arrogance, by her capacity to foresee the trend of events, and by her lack of scruples. But she has a miserable army, and in my story I have actually given it too big a role; for even though British officers died bravely in South Africa, there is only one word with which to describe their men and that is—cowards.” [I.F. Clarke (1965) History Today Volume: 15 Issue: 2 1965]