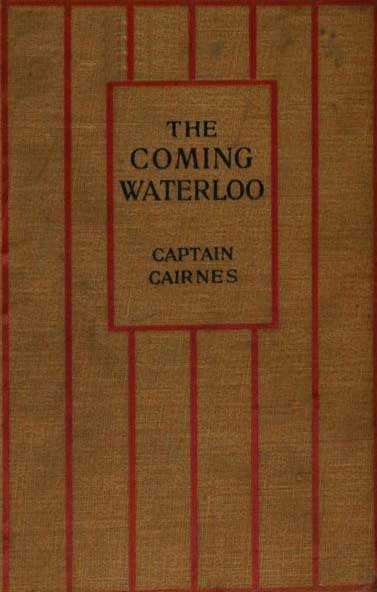 Captain Cairnes …..has … given us a very engrossing as well as plausible picture of the next great war. The time is in the immediate future—to be exact, the year 1903—France and Russia are ranged against England, Germany, and Austria, and although the British Fleet has asserted its undisputed supremacy at an early stage of the war, the conflict lingers on until after a series of feints a British expeditionary force succeeds in landing in the neighbourhood of Boulogne. The narrative deals with the brief campaign which culminates in the junction of the British troops with the German Army of the North.

Extract from the novel:

Thus when Germany joined in the fray the bulk of the French forces were not in the best position for meeting an invasion from the east, though that frontier was guarded by several army-corps spread out along it like beads on a string, from which army- corps the cavalry were furnished which made the futile attempt, already alluded to, to interfere with the German mobilization. However, as may be imagined, the French lost no time in turning to meet their new foes, and all the available troops were hurried to meet the danger threatening from the east, leaving only a force of observation of some two or three corps to watch the coast-line, in case of any attempt at invasion being made by the British. Such an attempt, however, was not seriously feared, as it was generally expected that Britain would not attempt to meet the armies of the Republic on land, the sea being the only element on which her power was regarded as at all formidable. It was at this juncture that the British Ministry decided on throwing into France the expeditionary force which had been prepared with so much care, if with so much haste; and the plan of campaign selected was to land somewhere in the neighbourhood of Boulogne, and marching thence on Douai, to endeavour to join hands with the German army of the North, which, as has been already mentioned, was invading France from Belgium.

IT would have been impossible to imagine a finer day than that on which the disembarkation of the army destined by Great Britain for the invasion of France commenced. The arrangements, carefully elaborated for weeks beforehand, worked with smoothness; no fogs, storms, or other untoward circumstances had interfered with the scheme of concentration, and now, at eleven o’clock on the morning of a brilliant August day, we see the enormous fleets of transports closing with the French coast. Two places had been selected for the disembarkation, the idea being to land two army-corps at Staples, a little town a few miles south of Boulogne, and the two remaining corps at the little town of Berck, a few miles further to the southward. The sight, could we have looked down on the great Armadas as from a balloon, would have been a very imposing one. Between the shore and the great flotilla of transports, from whose funnels a dark haze of smoke drifted lazily across towards the English coast, steamed slowly some half-dozen men-of-war, ready to turn their guns on any force prepared to interrupt or oppose the landing of the troops. On the seaward side of the black mass of troopships a grim and powerful squadron of battleships floated quietly, prepared against any foeman coming from the ocean, though an interruption from that side was hardly to be anticipated, unless the Russian Baltic fleet should succeed in eluding the vigilance of the British blockading squadron. Further out to sea were numerous cruisers, circling slowly, but ready at a moment’s notice to fly off at full speed, who acted for the time being as the eyes of the battle-fleet, assisted in this duty by a crowd of sinister-looking ” destroyers.”