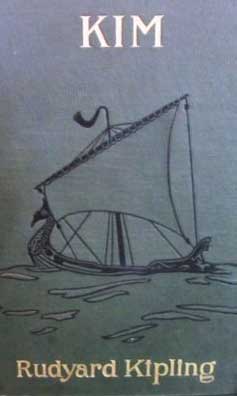 Although not in the mainstream Invasion Scare / Espionage genre Kim deserves a place as a prototypical spy story linked in to British imperial attitudes.

The story unfolds against the backdrop of The Great Game, the political conflict between Russia and Britain in Central Asia. It is set after the Second Afghan War which ended in 1881, but before the Third, probably in the period 1893 to 1898 …. After three years of schooling, Kim is given a government appointment so that he can begin his role in the Great Game. Before this appointment begins however, he is granted time to take a much-deserved break. Kim rejoins the lama and at the behest of Kim’s superior, Hurree Chunder Mookherjee, they make a trip to the Himalayas. Here the espionage and spiritual threads of the story collide, with the lama unwittingly falling into conflict with Russian intelligence agents. Kim obtains maps, papers, and other important items from the Russians working to undermine British control of the region. Mookherjee befriends the Russians under cover, acting as a guide and ensures that they do not recover the lost items. Kim, aided by some porters and villagers, helps to rescue the lama. The lama realises that he has gone astray. His search for the “River of the Arrow” should be taking place in the plains, not in the mountains, and he orders the porters to take them back. Here Kim and the lama are nursed back to health after their arduous journey. Kim delivers the Russian documents to Hurree, and a concerned Mahbub Ali comes to check on Kim. The lama finds his river, and achieves Enlightenment. The reader is left to decide whether Kim will henceforth follow the prideful road of the Great Game, the spiritual way of Tibetan Buddhism, or a combination of the two. Kim himself has this to say: “I am not a Sahib. I am thy chela.”  [Wikipedia]