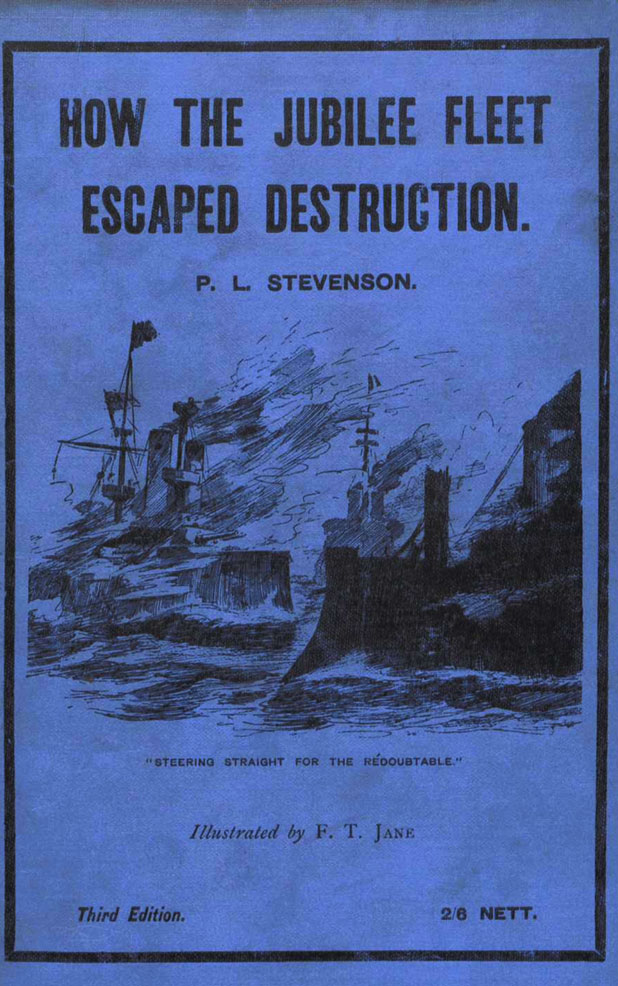 Stevenson, P. L. (1899), How The Jubilee Fleet Escaped Destruction and the Battle of Ushant: Or, Two Episodes in the Career of a Naval Officer. Illustrated by F.T. Jane

I have already sent you various MSS. dealing with the career of our mutual friend the late lamented Captain John Marling, R.N., and his services to this country in the late great war, the echoes of which have hardly yet died away. I have endeavoured to show how the existence of the secret coalition between the three Powers, Russia, Germany, and France, against Great Britain, was revealed to our Government, while our knowledge of the Great Plot remained unknown to the conspirators, and how, thanks to this ignorance on their part, Great Britain was able to foil the Allies at all points.

Beginning with Marling’s secret mission to Italy to secure the adhesion of that Power to our cause, I have gone on to describe at length the various episodes in the gigantic struggle which followed; such as the ” Battle of Asinara Bay,” where the French Reserve Squadron, from Toulon, seeking to overwhelm Lord Charles Carysfort’s detachment of the Mediterranean Fleet, was itself overwhelmed and destroyed by the Italian Fleet, Italy having, as ever, proved true to her pledges to this country ; the consequent successful junction of Lord Charles’s little force with the main body of the Mediterranean Fleet under Sir Edward Seamore off Cape di Gata, and their subsequent pursuit of the combined French and Russian Mediterranean Squadrons under Admirals de Beaumont and Skrydloff, which left Algiers secretly and hurriedly on the day of Asinara. Elsewhere I have endeavoured to pourtray such thrilling events as the duel of the French Menace and the British Termagant, the latter commanded by Marling’s fidus Achates, Boscawen ; the defeat of the combined Russo-German Baltic Squadrons off Dover by the British Reserve Squadron under Admiral Gale , and various events too numerous to recapitulate here in other parts of the world, such as the annihilation of the naval forces of the three Powers by the Anglo-Japanese Fleet in Chinese waters, and so on. To complete this narrative of the ‘ Great War of 1902,” I now send you Boscawen’s personal narrative of the ‘crowning mercy’ off Ushant, where the fleet of De Beaumont and Skrydloff,. having been allowed to form a junction with the Franco-German Fleet, blockaded in the port of Brest by the British Channel Squadron under Sir Marmaduke Hulme-Stanmore, the last-named gallant officer, reinforced by the arrival of Sir Edward Seamore with our Mediterranean Squadron, which had followed closely at the heels of De Beaumont and his Russian colleague, was enabled to win the great and ever memorable ” Battle of Ushant on the glorious 1st December, 1902, which for generations at any rate has settled the question of maritime supremacy in our favour. In addition to this, I have by great good fortune been placed in a position, thanks to Captain Boscawen’s kindness, to forward you an account of the narrow escape of the Jubilee Fleet in 1897, which up to now has been kept a profound secret, and which I flatter myself sees the light for the first time. In sending you these last chapters of the ” History of the Great War of 1902,” I do so in the hope that with your kind assistance in revision and editing, the work may prove not unacceptable to such of the British public as appreciate at their full value the enormous services the British Navy has rendered, and understand how absolutely indispensable to us, if we are to sleep quietly in our beds at night, is its continued existence at a strength unimpaired either by over – confidence or ill -judged and ill – timed parsimony. If I succeed, however imperfectly, in this my object, I shall feel that my labour has indeed been richly rewarded.