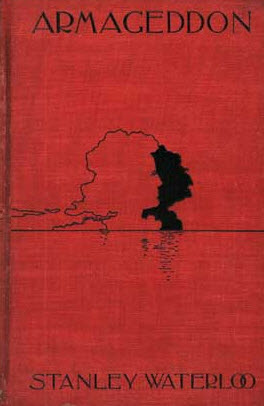 In the utopia and future war story Armageddon, the United States and its ally, the United Kingdom, are fighting a joint Russian—Southern European alliance over trade routes in the Pacific. As war clouds gather, the American scientist-inventor David Appleton volunteers his bomber dirigible, the Wild Goose, to the American-Anglo cause. In a great sea battle, Appleton uses the Wild Goose to drop a bomb on the Russians’ lead ship. The ship is pulverized instantaneously. This act, which brings the conflict to an immediate end, changes forever the nature of relations among nations. Accepting their military superiority as both divinely ordained and illimitable, the Americans proclaim: “We are the conquerors . . . we consider ourselves the approved of Providence in directing most of the affairs of the world.” As the story concludes, Appleton is hard at work building a new and better bomber, which he calls The Valkyr. It is his fervent hope and belief that this great bomber dirigible will never be used, since all now recognize that “war is suicide.” [Susan M. Matarese (2001) American Foreign Policy and the Utopian Imagination]