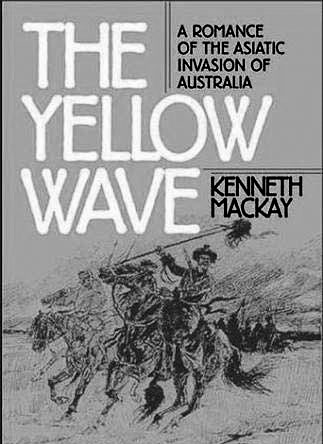 In 1885, while at Mittagong, Mackay raised a volunteer cavalry troop called the West Camden Light Horse and was appointed captain in command. Shortly afterwards he returned to the family property to assist his ageing father. He spent his quieter moments writing short stories and ballads. Several were published in newspapers and popular journals before his first book, Stirrup Jingles (1887). Similar publications in Sydney, A Bush Idyll (1888) and Songs of a Sunlit Land (1908), followed. He also wrote the novels, Out-back (London, 1893) and The Yellow Wave (1895), which imagined a Chinese invasion of Australia. [Australian Dictionary of Biography – http://adb.anu.edu.au/biography/mackay-james-alexander-kenneth-7379]

Major-General James Alexander Kenneth Mackay CB, OBE, VD (5 June 1859 – 16 November 1935) was an Australian politician. Born at Wallendenbeen Station near Cootamundra to pastoralist Alexander Mackay and Annie Mackenzie, he attended Camden College and Sydney Grammar School before farming at his father’s property. In 1885 he joined the military volunteers and raised the West Camden Light Horse; he was a commissioned as a captain in 1886. He published three books of poetry and two novels from 1887 to 1908, using the pseudonym Kenneth Mackay; in 1896 he published a play, To the West, a collaboration with Alfred Dampier. In 1897 he raised the first Australian Volunteer Light Horse Regiment, and he was elevated lieutenant-colonel in 1898. In 1895 he was elected to the New South Wales Legislative Assembly as the member for Boorowa, serving until 1899, when he was appointed to the Legislative Council, where he would remain until 1934. Mackay served as Vice-President of the Executive Council from 1899 to 1900 and from 1903 to 1904. From 1900 to 1901 he served in the Boer War commanding the 6th Imperial Bushmen’s contingent of New South Wales, during which time he was mentioned in despatches. Promoted colonel and then brigadier in 1912, in that year he was also appointed Companion of the Order of the Bath and awarded the Volunteer Officers’ Decoration. In 1920 he was promoted brigadier-general and later retired as a major-general; he was appointed Officer of the Order of the British Empire on his retirement. Mackay died at Cootamundra in 1935 [Wikipedia]