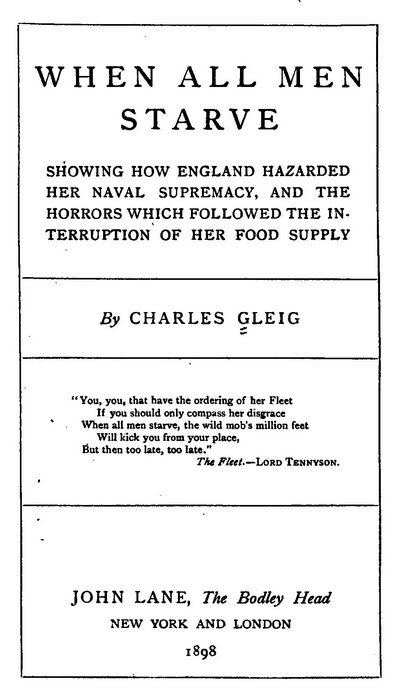 Charles Gleig (1897) When All Men Starve – Showing How England Hazarded Her Naval Supremacy, And the Horrors Which Followed the Interruption of Her Food Supply, London & New York, John Lane

The Boer War escalates into an Anglo-German war which is then joined by France and Russia.

The French journals especially indulged in most bitter invective against England, declaiming violently against our aggressive policy in Africa and the injustice of our quarrel with the Transvaal. The note of hostility found echo in the reptile press of St. Petersburg, and once more the old Egyptian grievance was exhumed, and furnished material for venomous journalistic attack. All this was somewhat disquieting, and the fluctuations of the Stock Exchange, the fall in Colonial stocks, created uneasiness in the City. Already the collapse of our trade with Germany had resulted in the closing of many great business houses, the bankruptcy of others, the discharge of thousands of Englishmen wholly dependent upon a weekly wage. This was, of course, inevitable, as, prior to the war, our exports to Germany were valued at thirty millions sterling and our imports from the enemy at twenty- seven millions. The immediate suspension of the trade could not fail to disturb the English labour market, and discharged clerks and work- men sought in vain for other employment. In London and other great towns of the Kingdom shabby clerks, growing daily shabbier, trudged sullenly from office to office begging piteously for employment on any terms, and finding none; car-drivers, artisans, shop assistants were similarly affected by the closing of great houses dependent upon the German trade.

This is another of the far too numerous stories of the “Battle of Dorking” type. Its ostensible object is to “show how England hazarded her naval supremacy, and the horrors which followed the interruption of her food-supply.” In other words, we are asked to believe—at least for the time being—that after Great Britain is confronted by a coalition consisting of Germany, Russia. and France, after her fleets have been defeated, and her food-supplies from abroad have been cut off, the residuum rises in its might and savagery, and marches into London. [The Spectator, 1st January 1898 http://archive.spectator.co.uk/article/1st-january-1898/34/when-all-men-starve-by-charles-gleig-john-lanethis ]