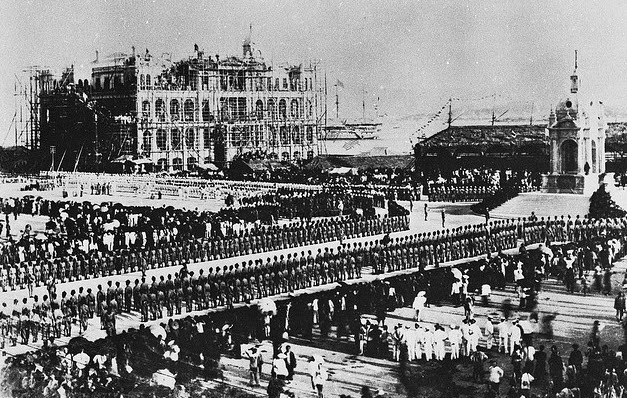 The Back Door was an anonymous work of invasion literature serialised in Hong Kong newspaper The China Mail from 30 September through 8 October 1897. The work, written in the form of a historical account, describes an imagined Russian and French landing at Hong Kong’s Deep Water Bay, followed by shelling of Victoria Peak, a sea battle in the Sulphur Channel between Hong Kong Island and Green Island, and a last stand at Stonecutters Island in which British forces were decisively defeated. The story was intended as a criticism of the lack of British funding for the defence of Hong Kong; fears of invasion were driven by French expansionism in Southeast Asia and increasing Russian influence in Manchuria. [Wikipedia]

The presence of such Russian operatives in Hong Kong was symptomatic of the constantly expanding Tsarist interest in the region, which alarmed both Britain and Japan, as did the Franco-Russian alliance concluded in 1893. One symptom of such apprehensions was the serialized publication, between October 9—16, 1897, in the Hong Kong newspaper The China Mail of “The Back Door,” a fictionalized anonymous account of a supposedly successful joint French and Russian invasion of Hong Kong in 1897, subsequently reissued in December as a pamphlet that was forwarded to the British Colonial Office. Probably written by a local journalist or military Officer and an exercise in scare tactics, “The Back Door” posited that such an invasion would succeed in three and a half days. The pamphlet, which though supposedly fiction featured numerous well-known Hong Kong personalities, was apparently intended to bolster an ongoing campaign by The China Mail to boost British defenses in Hong Kong by encouraging additional civilians to attend the impending annual camp of The Hong Kong Volunteers, and by persuading the government in London to provide adequate funding for gunboats, blockhouses, reserve batteries, additional troops, better roads and communications, harbor defenses, and siege provisions. When the camp took place, The China Mail reported prominently on it, and with its rival The Hong Kong Daily Press also published articles highlighting potential Russian threats to India, Manchuria, Mongolia, and the rest of Asia, as well as following up on the calls to enhance Hong Kong defenses. [Michael B. Share (2007) Where Empires Collided. pp. 27-28]

The Back Door” (referring to an unguarded entrance) was first published serially in the Hong Kong China Mail from 30 September through 8 October 1897. It was then reprinted as a small booklet by the newspaper later in 1897. This chapbook, which is extremely rare, is not recorded by either the British Library or the Library of Congress Union Catalogue. The author is unknown, although the probabilities are that he was a staff member of The China Mail. The text, which is presented as a chronicle, follows the model of George Chesney’s The Battle of Dorking (1871). It is introduced by a statement dated 1917, looking back and deploring the events of 1897. The body of the text then follows a pattern common to the subgenre: invading forces attack unexpectedly, sweep everything before them despite heroic resistance, and subdue the territory, which is permanently lost. In this case, the invaders are France and Russia in alliance. (The historical background to this now seemingly unlikely combination was British uneasiness about the French conquest of Indo-China and Russian manipulations around Manchuria.) The causes for the invaders’ success are short-sightedness and false economy on the part of London, which made no provision for the defense of the colony. This rationale, of course, was a standard for most serious imaginary-war stories, which called for heavy rearmament. [Science Fiction Studies https://www.depauw.edu/sfs/birs/bir86.htm ]