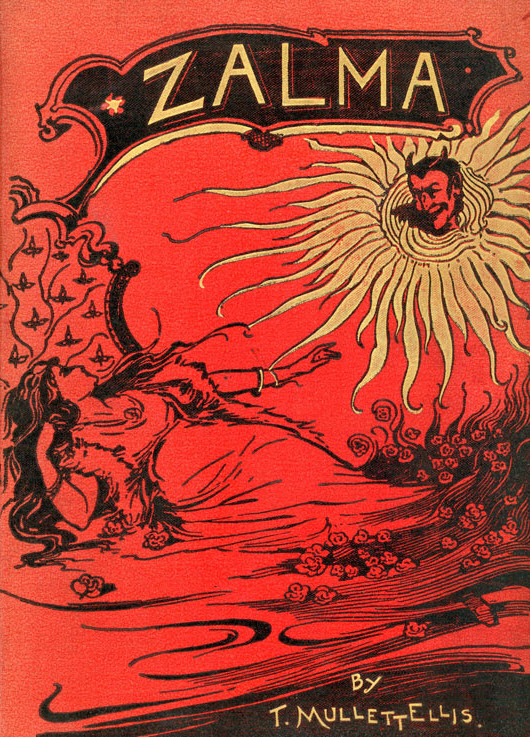 The eponymous female villain in Zalma (1895) by T Mullett Ellis seeks to continue her father’s efforts to destroy the nobility of Europe and plans to release balloons laden with anthrax over the capital cities, but is thankfully thwarted before she can carry out her plan. [Mike Ashley, The Fear of Invasion, British Library, http://www.bl.uk/romantics-and-victorians/articles/the-fear-of-invasion]
Following quickly on the heels of Olga Romanoff, and overtly referencing The Angel of the Revolution, was T. Mullett Ellis’ Zalma (1895), in which Zalma von der Pahlen, daughter of the leader of the international nihilist and anarchist movements and, after his death, the leader herself of those movements, plots to spark a socialist revolution by launching a fleet of anthrax-infested balloons into the capitals of Europe. [Jess Nevins (2011) From Alexander Pope to “Splice”: a Short History of the Female Mad Scientist, http://io9.com/5794436/from-alexander-pope-to-splice-a-short-history-of-the-female-mad-scientist]

This article outlines the appearance of biological entities as agents of terrorism in late nineteenth century literature; specifically the use of anthrax in “Zalma” – an 1895 novel by the English author Thomas Mullett Ellis. This is one of the very earliest accounts, in either fiction or non-fiction, of the use of such an entity in this context, and encourages us to re-examine our understanding of biological terrorism using anthrax as a recent phenomenon. [Stark, JF. Medical Classics: “Zalma”, BRITISH MEDICAL JOURNAL; SEP 1, 2010; 341]