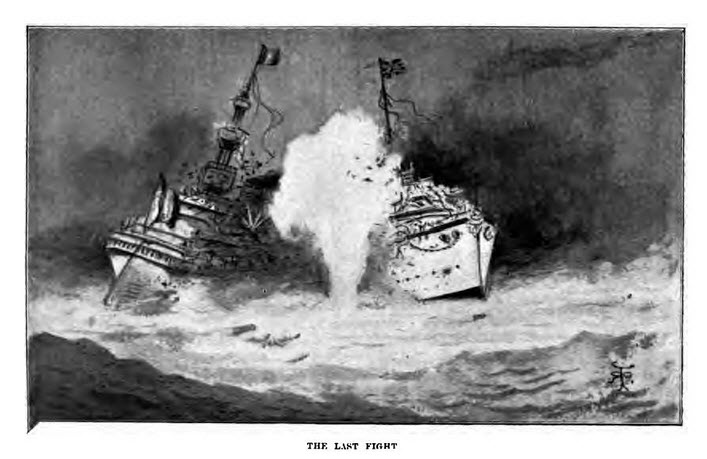 Many years ago the writer of these pages first conceived the idea that, as the heavy guns of a modern ironclad were, and must ever be, her decisive weapons, the chief thing to be attended to was to increase their rate and precision of fire, und that the power requisite for this purpose could readily and economically be obtained from the guns’ recoil. Further, it occurred to him that this might enable the crew to be withdrawn from the vicinity of the guns, and the weight of the necessary armour protection to be greatly reduced.

Ideas of this sort were taken up at intervals as the amusement of idle hours, but it was long before they assumed any definite shape, and longer still before any notion was entertained of bringing them to any serious or practical conclusion.

Meanwhile a great development took place in quick-firing guns of smaller calibre, a development which has not as yet been attended by any corresponding development in the means of protecting the men working them. The urgent need of some such protection was forcibly pointed in his well-known work, ‘In a Conning Tower’ but he gave no indication of the direction in which this protection was to be sought. In reading that work it struck the writer that the requisite protection could not be obtained from armour without exceeding the available limit of weight, that the only means of affording it was to enable the sailor to find shelter in water as the soldier does in earth, and that this was an additional reason for the use of automatic artillery.

But when Mr. Arnold Foster wrote, the need of protection, though urgent, was as nothing to what it has since become. In 1891 high explosives ‘ were known indeed, but their poisonous effect was not appreciated ; subsequently, it was recognised that the fumes of modern shell were at least as dangerous as the splinters, and indeed more so, for shields and case- mates might afford some protection against the splinters, but would be useless against the fumes. Here, again, it seemed that the notion of the shelter- trench was the only adequate solution of the problem.

Still the writer hesitated to publish his views with- out first knowing that an automatic heavy gun was not only desirable but possible, and he probably would have kept his ideas to himself if they had not almost by accident been communicated to a professional friend, under whose guidance they quickly assumed a very different and far more practical shape.

As soon as the design was fairly complete, there was no longer any reason for silence, and accordingly an article was published in the Contemporary Review ‘ of last September, which evoked the not unnatural query what fighting with automatic weapons would be like. In order to answer this question, the first thing to be done was to put some limit on the inquiry otherwise any attempt to answer It would be sure to end in describing one of those mythical contests between an unheard-of ironclad and an equally unheard-of enemy of which we have too many already, and from which nothing ever has been learnt or ever will be. And the best mode of confining the inquiry within some definite limits seemed to be to take some one modern ship of acknowledged excellence, to re-arm her with the proposed weapons, and then to imagine her engaged with other ships equally modern, but of various types. This method the writer has attempted to pursue in the following pages, which he puts forward in the hope that they may meet with the indulgence of the reader.

It only remains to apologise to all interested in the various ships mentioned for the liberties taken with their names, and above all to the captain and officers of H.M.S. Centurion and to the Chief Constructor by whom she was designed.