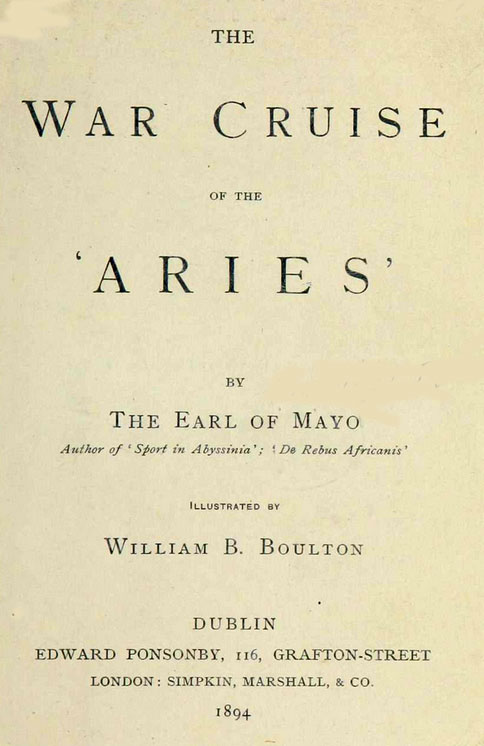 The Earl of Mayo (1894) The War Cruise of the Aries, Illustrated by William Boulton, Dublin, Edward Ponsonby

CHAPTER 1. HISTORY OF THE WAR.

In 18__  England was at war with France; and before coming to the history of the cruise of the ‘Aries,’ it is proposed to recount, as briefly as possible, the events which led to that short, but terrible struggle.

It was a well-known fact that France was intriguing with the ruler of Egypt against England. A plot was discovered; the conspirators had arranged a general rising; an attempt to fire the barracks occupied by the British troops was to be made. The recent considerable reduction in the numbers of the army of occupation made by the Radical Government was greatly in favour of the success Of the conspiracy. The plot, however, did not escape the vigilance of our Minister. He promptly had the chief of the Egyptian conspirators arrested; martial law was at once proclaimed in Cairo and Alexandria, and several leading French officials implicated in the rising were confined to their official residences by the military authorities.

From papers found on some Of these gentlemen it was clear that the plot did not originate entirely in Egypt; officials in high positions in France were involved, and it was even proved that some of them had provided money for the bribing of low intriguers and bazaar agitators in Cairo. This was communicated in a despatch to the Secretary of State for Foreign Affairs. Without hesitating, our Minister at Cairo placed the leading Frenchmen implicated on board a P. and O. vessel then lying at Alexandria, and made them leave the country.

The French Press, on the receipt of this news, exploded with rage; every journal howled and screeched ‘å bas les Anglais’; full satisfaction was demanded ; and the French announced that their countrymen sent out from Cairo (with a polite intimation not to return) would claim large damages for loss of domicile, &c. &c.

As yet the general public was unaware of the promptings from Paris which had caused the riot and plot at Cairo. In answer to the demands of the French Government, the Secretary of State for Foreign Affairs wrote a despatch giving copies of the documents found in the houses Of the expelled Frenchmen at Cairo. Then the English Press thundered forth, intimating that such a grave matter might lead to more serious results than were anticipated when the first news of a riot at Cairo was telegraphed to London. The Secretary Of State for Foreign Affairs’ despatch was read out in the French Chamber of Deputies; some could scarcely believe their ears when the promptings of the plot by high French officials were alluded to. There was a pause; then a howl of execration; taunts and curses were heard; every epithet that a Frenchman could conceive was applied to England, and the Chamber emptied itself. The excitement spread outside, and an excited mob followed the deputies screaming, ‘å bas les Anglais,’ ‘ Albion perfide,’ ‘ Vengeance,’ ‘å Caire,’ and ‘ une declaration de guerre.’

Next day the French Press took a more sensible view of the matter, and, although some newspapers still inveighed against England, others demanded that the affair should be thoroughly inquired into, they allowed the allegations were most serious, and that the Secretary Of State’s despatch seemed to be a statement of facts which could not be merely contradicted.