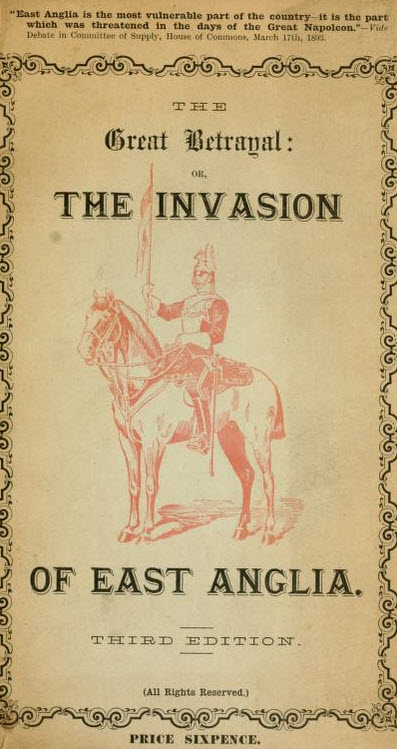 A Gladstonian M.P. (1893) The Great Betrayal: or, The Invasion of East Anglia

SLIGHTLY modifying the proverb, “Si non e veri ben trovato” it may be said of this little sketch that, if not true, it is likely to become so. Given a certain set of causes, corresponding effects may be fairly anticipated ; and upon such a basis the present writer, in 1884, ventured to foretell precisely the course Mr. Gladstone would take in Egypt, and the disaster that would ensue. The late Lord Iddesleigh, writing to the author, then expressed the fear that his predictions would prove “an owre true tale;” and they were fulfilled almost to the letter. In this instance no one desires more earnestly than the augur that events may falsify his prophecy.

The slender defences of our Eastern seaboard—an item not omitted from the calculations of Continental strategists—render not inappropriate the selection of East Anglia as the theatre of war.

With regard to the strange tragedy that closes the Spy’s career,such an incident has actually occurred on active service.

Britain faces invasion by France and Russia aided by an Irish factions following Britain’s abandonment of Ireland. Russia seizes India and together with the French drives Britain out of Egypt.