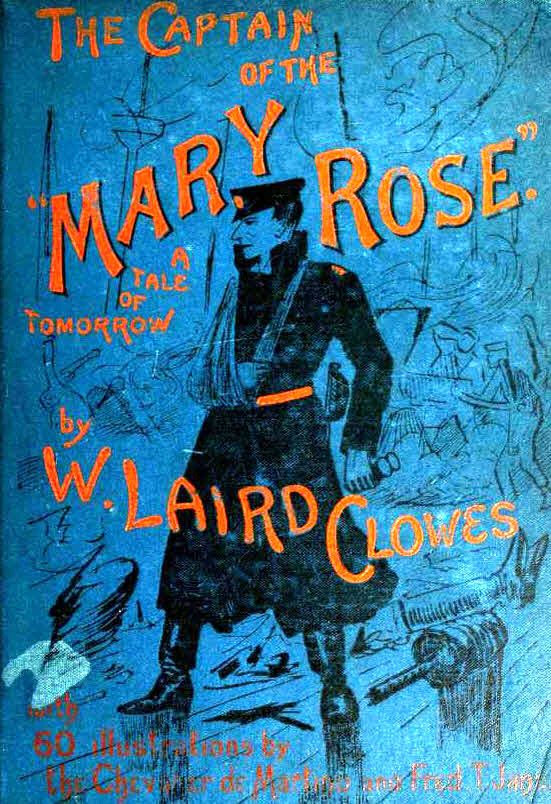 This is a ” tale of to-morrow,”—i.e., of the next naval war. We find ourselves suddenly at war with France. Our neighbours, better prepared for eventualities than we are, strike the first blow with astounding promptitude, and the Mediterranean Fleet is practically destroyed. Disaster after disaster falls on the naval defences of England. How these reverses are redeemed, we must leave our readers to discover for themselves from Mr. Laird Clowes’s pages. We need not say more than that the fighting is terrifically destructive—as, indeed, all probabilities and such experience as we have had would lead us to expect—and that it is described in an effective way, and with much verisimilitude. A love-story is interwoven with the plot, but does not unnecessarily distract the attention. [Spectator 29 April 1893]

Sir William Laird Clowes (1 February 1856 – 14 August 1905) was a British journalist and historian whose principal work was The Royal Navy, A History from the Earliest Times to 1900, a text that is still in print. He also wrote numerous technical pieces on naval technology and strategy and was also noted for his articles concerning racial politics in the Southern United States. Despite having trained as a lawyer, Clowes had always preferred literature and writing, publishing his first work in 1876 and becoming a full-time journalist in 1879. For the services rendered in his career, Clowes was knighted, awarded the gold medal of the United States Naval Institute and given a civil list pension.[1] He died in Sussex in 1905 after years of ill-health. [Wikipedia]

To every Briton, the question: “What will the sea- fighting of to-morrow be like?” is of supreme interest and importance. Ours is a sea empire. The confines of our dominions lie, not upon our own coasts, but upon the coasts of our neighbours; and unless in the future we can, as we have done in the past, hold our dominions, be they shore or be they ocean, against all comers, our national glory will be eclipsed, our wealth will vanish, and our greatness will be annihilated.

It is primarily in order to put forward a tentative answer to this question that I have written the story of the Mary Rose. I have seen no real fighting at sea. There are very few who have. But I have seen an immense amount of sham-fighting — more, it is possible, than anyone else ; for, besides witnessing manoeuvres abroad, I have for eight successive years gone afloat to follow the operations consequent upon the annual mobilisation in our own home waters. The sham thing, I am quite aware, must be very different from the terrible reality. It affords, nevertheless, a key to the reality; and, armed with that key, I have been so bold as to endeavour to open the future. Similar endeavours have been made before. In conjunction with my friend, Commander Charles Napier Robinson, R.N., I myself made the endeavour in 1886, when Messrs. Hatchards re-published for us, from the pages of the St. James’s Gazette, “The Great Naval War of 1887.” Not long afterwards another friend, Mr. H. O. Arnold-Forster, now M.P. for West Belfast, contributed to a monthly magazine his excellent forecast called “In a Conning Tower; or, How I took H.M.S. Majestic into Action,” and last year he re-published it. Last year, also, appeared “The Last Great Naval War: An Historical Retrospect,” by “A. Nelson Seaforth,” whom, I shrewdly suspect, I have the pleasure of knowing under a name which, in the Navy, is closely identified with lamps, signals, speeches at the Royal United Service Institution, and letters to The Times. Other endeavours I need not particularly allude to. The present one is intended to differ from its predecessors in being less technical, and in paying attention to some aspects of naval warfare that have been neglected by all the rest. These aspects, I venture to hope, will especially recommend them- selves to British boys. If they will take an intelligent interest in modern naval developments, we shall not, twenty or thirty years hence, have to lament that upon naval questions the tax-paying public is ignorant or apathetic; for not only the boy is the father of the man, but also the study of matters naval is so seductive that, I believe, no Englishman who has once taken it up has ever willingly relinquished it.

My first aim, then, has been to give a readable tentative answer to the question: “What will the sea-fighting of to- morrow be like?”

In writing as I have written, I have been animated by no unfriendly and by no unfair feeling towards France. I have represented French officers as being fully as scientific and brave as their British “opposite numbers,” and I have never represented a Frenchman as doing a thing which, if done by an Englishman, would shame him. In the past, when we have been enemies, we have, I trust, been honest and cordial ones. I am sure that, in the future, if fate should unhappily make us opponents, we shall not be less loyal foes than we were ninety years ago, and that after- wards we shall not diminish our respect one for the other.

I am most fortunate in having had, in this work, the co-operation of my friend, that most distinguished of marine painters, the Chevalier Edouardo de Martino. He volunteered to illustrate what I should write; and to receive such an offer from so admirable an artist was, of course, to gladly accept it. When, as he and I believed, we had completed our labour, be was called to South America. The editor of The Engineer was then so good as to think that the story of the Mary Rose might be welcome to the readers of his paper. He wished, however, to have additional illustrations, and these were in due time supplied by Mr. F. T. Jane, a young artist who has already made his mark in this particular branch of black and white drawing. While the story was being published in The Engineer, Mr. Jane offered to prepare a number of further illustrations, and these, now printed for the first time, will, I think, be found among the most effective of his contributions. To the proprietors of The Engineer, for their permission to use Mr. Jane’s first series of illustrations, and for the facilities which they have placed in my way, I tender my grateful thanks.