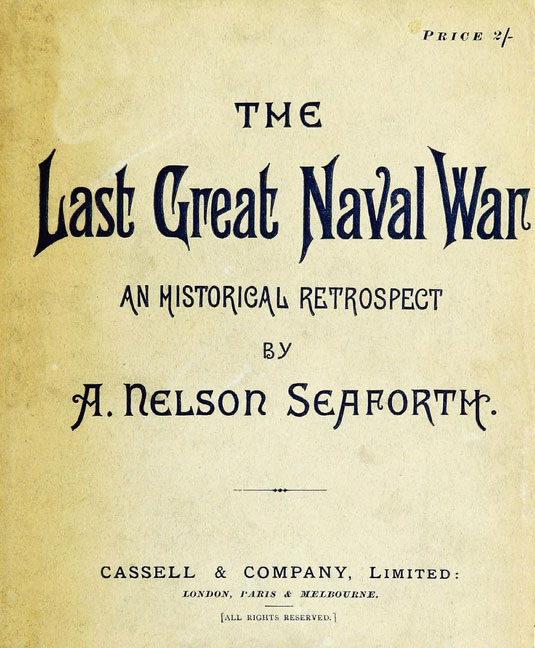 A retrospective (supposedly written in 1930) looking back on an Anglo-French naval war in the 1890s.

Preface: So many able pens have dealt with the last great naval war that an apology is needed for adding to the already copious literature of the subject. Some of the existing histories, such, for instance, as the excellent works of Admiral Colomb and Professor Laughton, are, however, perhaps too strictly professional for the general reader; while Professor Bryces National Federation deals mainly with constitutional questions. Other books, written for popular consumption, are too largely occupied with the many personal and dramatic aspects of the great struggle. I have endeavoured to steer a middle course between the two extremes, and, while not neglecting the human interest, I have striven to set forth the many great lessons of a war which has left an enduring mark upon the nation and the race. Thus this little work is necessarily a compilation; and to the many accomplished writers from whom I have freely borrowed, my grateful acknowledgments are offered. Their labours have rendered my humbler task possible. Brighton, 1 st June, 1930.

Extract: In the early days after the declaration of war, it was perhaps inevitable that an alliance should have been somewhat eagerly sought after. ” It is almost certain that we shall never have to enter into any quarrel in .which we cannot, on the do tit des principle, obtain alliances,” was the dictum of a military writer a few years previously; and to Germany, assumed to be the natural enemy of France, the popular fancy turned. Subsequent revelations, in fact, showed that the Government had endeavoured up to the last to secure German support. The Emperor was, however, engaged in combating one form of socialism by another, reconstructing the whole educational system of the country, and a variety of minor projects, including compulsory inoculation with Dr. Koch’s latest lymph. Alsace-Lorraine was becoming reconciled. There was nothing to be gained by a war which, if Germany moved, would probably spread throughout Europe.

Great Britain, not France, was Germany’s real rival in her colonial ambitions. On the other hand, the weakening of both Great Britain and France would be to the obvious advantage of Germany. Both navies would doubtless suffer, and German naval aspirations would be furthered. Finally, the Emperor, by holding his hand, would not only preserve the general peace of Europe, but might possibly intervene with powerful effect at some later stage, without expending one Pomeranian grenadier.