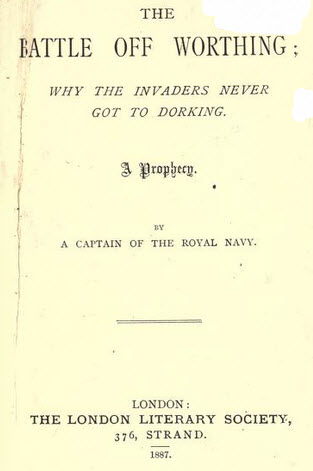 Anonymous (1887) The Battle off Worthing: why the Invaders never got to Dorking

As an example of how other writers picked over the dry bones of the Dorking a ninety-six page novella by an anonymous “Captain of the Royal Navy,” titled The Battle Off Worthing: Why the Invaders Never Got To Dorking (1887), may be worth a brief summary. In his introduction the writer recalls how Chesney’s fable, while condemned by the press as visionary and improbable, nevertheless had instilled in the populace ‘”a latent feeling of insecurity.” It was that pamphlet which “first stirred the national pulse. Everybody read it, and everybody spoke of it.” What the army colonel failed to take into account and the naval captain wished to show was the genius of the English race in nautical improvisation.   [Cecil D. Eby (1987), The Road to Armageddon: The Martial Spirit in English Popular Literature]