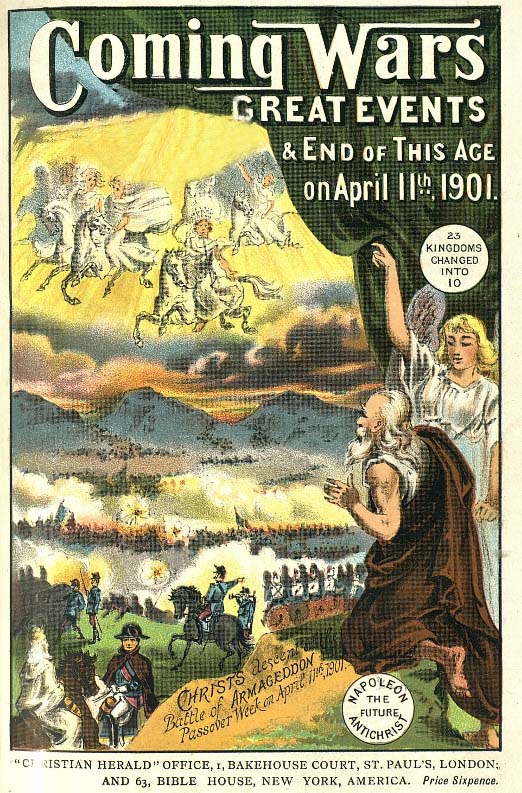 A reprint of a religious pamphlet first issued in 1881 and forecasting upheavals and wars in Europe coupled with forecasts of Armageddon in 1901.

Dissolution of the Turkish Empire into the Five Ancient Kingdoms of  GREECE, EGYPT, SYRIA, Thracian TURKEY and BULGARIA, which with BRITAIN (Separated from Ireland), FRANCE, SPAIN, ITALY, and AUSTRIA, will be formed into an Allied Confederacy of Ten Kingdoms, after Wars and Revolutions between 188B and 1891, Extending France to the Rhine, and adding to it Belgium, Luxemburg, Alsace, Lorraine, Rhenish Prussia, Switzerland, &c. – Subsequent rise of a Napoleon as King of Syria—His Seven Years’ Covenant with the Jews on April 21, 1894—Resurrection and Translation of Saints, about March 5, 1896 – 1260 days’ Great Tribulation and Napoleon’s worldwide Persecution of Christians, Aug. 14-15, 1897 to Jan. 26, 1901— Descent of Christ at Armageddon on last day of Passover Week, April 11, 1901—Ensuing Millennium of 1000 years, &c.