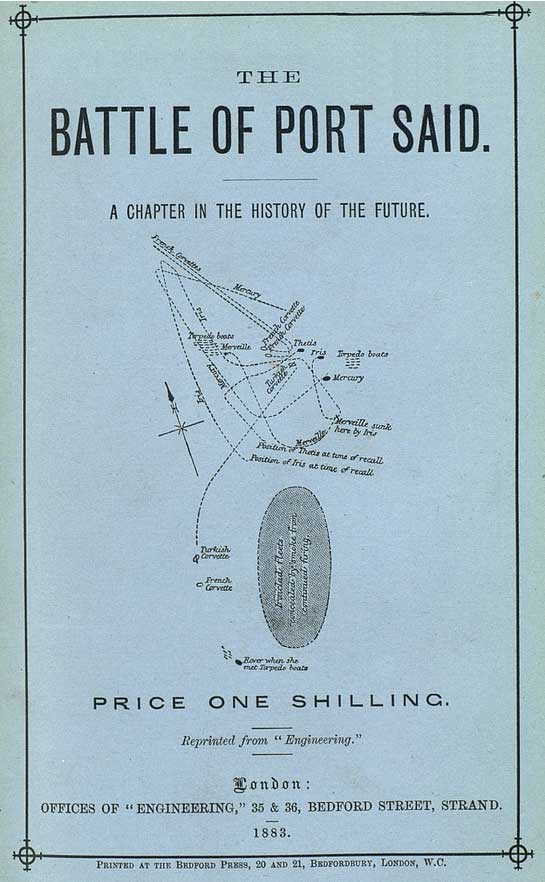 A fictitious account of the “Battle of Port Said.” set in June 1886, in which  England and Germany fought as allies against the combined forces of  Turkey, France and Russia. Told over six issues of Engineering in 1883.

In giving this account of a naval battle supposed to be fought in the immediate future, I have endeavoured, as far as possible, to introduce the actual ships and their belongings which would probably be in the Mediterranean at the time of which my story treats, but I wish it to be understood that the views given are my own, and that if have used words or enunciated views as coming from any particular officer, as, for instance, the Commander-in-Chief of the Mediterranean fleet, flag captain, captain of the Hecla, &c., it is merely to imaginary characters I ascribe these views, and do not for a moment mean to say that the real officers who hold these respective positions are in any way responsible for them. The object of the story is to expose certain weaknesses in the construction and management of our ships, which it is believed can thus be more effectively dealt with than in any other way. Most of these weaknesses are well known to officers engaged in active service, but they appear for the most part to be ignored by our Admiralty authorities, not-withstanding their undoubted importance.

Egypt, as a consequence of the events of 1882, being brought practically under our control, the Turks only waited an opportunity for re-establishing themselves in their former position ; France, being jealous of England’s supremacy in Egypt, and having more leisure time to attend to foreign affairs than formerly, when she allowed us to settle Egyptian matters in 1882, became allies of Turkey ; but Germany, not unwilling to embrace the opportunity, joined the English. On the other hand, the Russians, seeing a chance for forcing open the Black Sea ports, joined the French and Turks.

Hence, at the time of which I speak, we found ourselves, with the Germans and Egyptians on our side, engaged in a war against the French, Russians, and Turks. I have no intention of entering upon the political details of the day. These you well know, and others have described them far better than ever I could do. I merely remind you of what is absolutely necessary to lead up to the naval fight of Port Said.