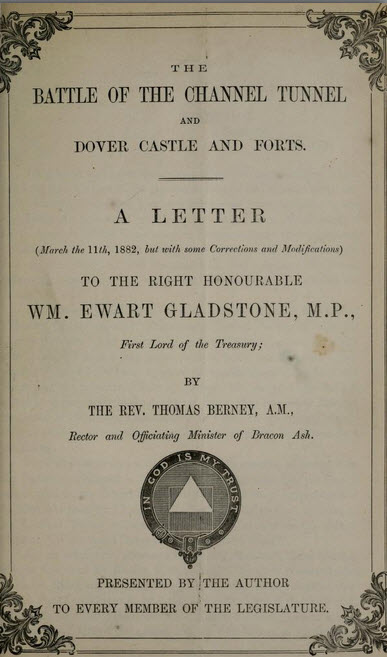 Rev. Thomas Berney (1882) The battle of the channel tunnel and Dover Castle and forts : a letter (March 11th, 1882, but with some corrections and modifications) to the Right Honourable Wm. Ewart Gladstone, M.P., First Lord of the Treasury

Sir, I beg leave with great respect to address you upon a subject which has long been a source of the greatest anxiety to me, and to which I am most thankful to see that you have given your recent attention in the appointing of a Scientific Committee ; and then, I learn, of a Committee on the question of the Expediency or Non-expediency of the proposed Channel Tunnel; ” that the Government might give it their immediate and complete attention,” and ” communicate their opinion to the House before any proceedings ” be ” taken upon the two private Bills before the House.”

I have recently read for the ‘first time, in the Evening Standard of February 6th, the reported “Conversation ” upon the subject with Sir Garnet Wolseley : and although the gallant General does not enter into that question, I think I may gather from it, that it would require a permanent Force of 20,000 men to guard the approaches on this side of this tete du pont of a submarine Railway Bridge : the loss of whose services would be a very great hindrance to his Royal Highness Field Marshal the Duke of Cambridge Commanding in Chief, on a certainly simultaneous attack upon our shores, upon one or more points, by a Force from Cherbourg.

I saw also the strictures, upon the General’s remarks, as quoted from the Repuhlique Francaise in “referring to the hypothesis, that the French might seize on the Tunnel before a declaration of war,” suggesting that he must take them for “Ashantees.” I also saw that some upholder of the Channel Tunnel Scheme asked, as if in answer to the gallant General, “What would Dover Castle and Fort be doing?”

Let me mention, in answer to that theory, that Mr. Charles Alanson Knight, brother of Mr. Knight, M.P., Colonel of the First Worcestershire Volunteer Rifles, was in Rome during all the seige of that fortified City by the French : and that he said, that the embrasures of the walls of it were completely under the command of French Riflemen ; each of whom was ensconsed behind his gabion, with his rifle laid so as to command the particular porthole which he was commanded to watch ; and with a string attached to the trigger of it : so that the moment the head of a Garibaldian was seen looking out from it, however cautiously in the early dawn, the string was pulled ; and a rifle ball sped its projected course, and probably several others at the same moment, into that port- hole : and he further told me, that there was scarcely a single morning on which he did not see the bodies of several soldiers laid out upon the ramparts, who had been so picked off during that morning.

It is, therefore, manifest, that, the wires being in the hands of the French, and the Telegraph boy with a pistol held at his head, a body of the enemy, though previously undeclared, could during a night obtain possession of this mouth also of the Tunnel ; so as to prevent the possibility of its being blown up by the British, or the mine being even charged: while a body of French Sappers and Riflemen, with their gabions, spades and rifles, could be thrown out ; and, before daylight, be in similar command over every embrasure and porthole of Dover Castle and Fort, or of any other various Forts that might be made instead of them : and then a column of French Regiments, brought ready packed in trains by surprise from the interior of France, would be debouching from the Tunnel: so that, before 10,000 British Troops could arrive, there would be 20,000 French Troops in command of the heights around Dover, and the Telegraph at work bringing up 100,000 more on the Line, and despatching the inevitable expedition from Cherbourg !