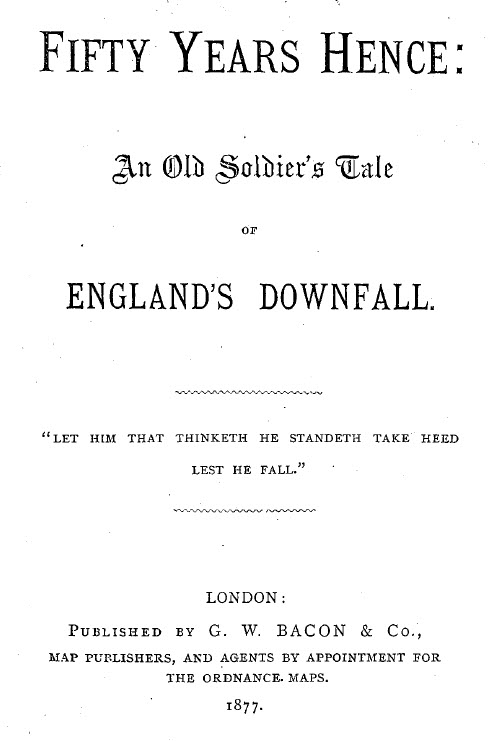 A soldier’s reminiscences from 1927.

Britain gets dragged into a conflict between Russia and Turkey on the Turkish side. Austria, our only ally, is pressured by Germany to stand aside and the British declare war on Russia when the Suez canal is blocked and Alexandria bombarded. Germany aligns with Russia. Our fleet suffers eventual defeat and a weakened Britain cannot prevent an uprising in India that quickly frees it from British rule. Britain is forced to accept punitive peace terms.

IT was a beautiful autumn evening in the year 1927 ; the cool refreshing breeze—so welcome after the hot harvest day—brought with it those delightful odours which tell us that the time of fruits is at hand : the ripening grain waved its tall head proudly, as if boasting that it was ready for the reaper, or already gathered into sheaves seemed to sing a song in’ soft cadences to the wind, whilst the birds warbling sweetly overhead added a charm to the scene.

In front of a comfortable country house sat a man, whose grey hairs betokened age, and whose face, deeply furrowed, showed that he had been no stranger to sorrow and care; still there was a certain dignity in his countenance which these seemed only to heighten. One of his coat-sleeves *Was empty, which circumstance, added to his fine martial bearing, proved him to have been at one time a soldier. Before him played three lads, evidently his grandchildren, but even their mirth and happiness could not drive away the cloud which seemed to hang about him. Often would they run breathlessly to tell him of their pleasure, but he joined not in it ; and when they had either scampered away out of sight or were quiet in their sport, his eyes fixed themselves on vacancy, and one might have seen that his thoughts were dwelling on other scenes and times. Now and again a tear would start from his manly eye, to be hastily dashed away, as if he were ashamed of it, and afraid that any should see his weakness ; but before long he would resume his musing, and the tear-drop would return. As the night shadows drew closer around, the weight of his sorrow seemed to grow heavier—the deep heaving of his breast, and the long-drawn sighs which escaped him, betokened the struggle within; until at last, as if the crushing weight could be borne no longer, burying his face in his hands he burst into a flood of tears, which not even the sudden appearance of his grandchildren could check. They stood before him awed into silence, and with wondering faces waited for the tears to cease, and then with loving care helped the feeble old man into the house. His grief was all new to them ; no misery had ever cast its shadow on their young hearts to damp their spirits and crush their joy, and to see their loved and loving grandsire—whose face for them had always beamed with a heavenly glow—thus cast down, filled their hearts with fear, and they lingered around him when he had reached his room, as if to learn the cause. He knew their wish, and when his grief was partially spent, and he had recovered his voice, he told them why he had wept so bitterly.

” The enemy, however, had not been idle. In Europe, he, aided by Germans, Roumanians, Bulgarians, and Montenegrins, had closely invested Constantinople on the west side by raising a strong line of entrenchments, stretching from the Sea of Marmora to the Black Sea, forming a splendid base from which to attack the city, and the forts on the north side of it. Had our allies been properly on the alert, this should never have been allowed; but that apathy which has been the curse of their race, was in this instance the great instrument of their ruin. As soon as this line was completed, and before our fleet could be there to prevent it, the Russians were enabled to transfer a large number of their troops into Asia Minor by transporting them across the Dardanelles, a little to the east of Gallipoli, and these were now ready to march to Scutari on the south, whilst the army which had been operating in Armeina, having captured Kars and Erzeroum in the early part of the war, and reduced all Asia Minor, proceeded to join and co-operate with the army just mentioned.”