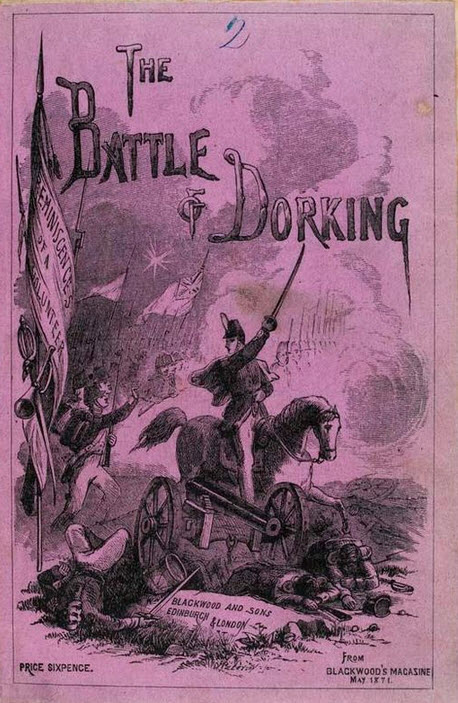 For many, this is the work that is regarded as the start of Invasion Literature as a distinct genre.

DURING THE EVENING OF 2 September 1871, the British Prime Minister spoke to the Working Men’s Liberal Association at Whitby in Yorkshire. Towards the end of his speech he warned his audience and the nation against the dangers of alarmism. It was an unusual occasion in British political history, since Gladstone was attacking a short story that had appeared four months earlier in the May issue of Blackwood’s Magazine. It was an even more remarkable moment in literary history. Gladstone was paying unwilling tribute to the effectiveness of The Battle of Dorking, a short story about an imaginary invasion of the British Isles that had alarmed the nation, astonished Europe, pleased many readers in the United States, and established the tale of the war-to-come as a favourite means of presenting arguments for – or against – changes in the naval, military, or political arrangements of a country during the years from 1871 to 1914. Sir George Tomkyns Chesney, the anonymous author of the Bat- tle of Dorking, had written the first hot story in the first cold war of armaments and mass conscription. It was a soldier’s recognition of the military consequences of progress and an admission that the Franco- Prussian war had altered the structure of power in Europe. In fact, there are good reasons for claiming that the Battle of Dorking was the most remarkable short story written in Europe during the nineteenth century; for from 1871 onwards Chesney’s tale of disaster and defeat provided both the form and the technique for the many forecasts of future wars that began to appear in increasing numbers throughout Europe. British, French, German, and Italian writers learnt from Chesney how to deliver a lesson on naval policy or a warning about military weaknesses in a pattern of fiction that the middle classes and – later on in the ‘nineties – the newly literate masses could readily comprehend. [Clarke, I. (1965). The Battle of Dorking, 1871-1914. Victorian Studies, 8(4), 309-328]

Chesney was a captain in the Royal Engineers and had grown concerned over the ramshackle state of Britain’s armed forces. He used fiction as a device to promulgate his views after letters and journalism on the issue had failed to impact on the public consciousness. The Franco-Prussian War (1870-1871) had just demonstrated the speed, superiority and adaptability of the Prussian Army, which meant that Chesney’s depiction of a fast-moving and determined invader hit a nerve.The story is told as a narrative by an unnamed veteran who participated in the Battle of Dorking. He is recounting the final days before and during the invasion of Britain. It is addressed to his grandchildren as an event fifty years earlier. Beginning sometime after an event similar to the Franco-Prussian War, concerns grow with the mobilisation of armed forces near the Netherlands. The Royal Navy is destroyed by a wonder-weapon (“fatal engines”), and an invasion force suddenly lands near Worthing, Sussex. Demilitarisation and lack of training means that the army is forced to mobilise auxiliary units from the general public, led by ineffective and inexperienced officers. The two armies converge outside Dorking, Surrey, where the British line is cut through by the advancing enemy and the survivors on the British side are forced to flee. The story ends with the conquest of Britain and its conversion into a heavily-taxed province of the invading empire. The British Empire is broken up, with only Gibraltar and Malta being kept by the victorious Germans. Canada and the West Indies are ceded to the United States, and Australia, India and Ireland are all granted independence. Ireland enters a lengthy civil war as a result. [Wikipedia: https://en.wikipedia.org/wiki/The_Battle_of_Dorking ]

The fictional Battle of Dorking took place in 1875. Germany had defeated France and annexed Holland and Denmark. Britain declared war and Germany invaded an ill-prepared Britain. Troops came ashore at Worthing and began moving inland. Written by Sir George Chesney, The Battle of Dorking was published anonymously in Blackwood’s Magazine in 1871. In Chesney’s tale, a battle takes place at Dorking between the invaders and British defenders; Dorking occupies a strategically vital point between the troops’ landing point on the south coast and London. Failure to defend the heights of Ranmore and Box Hill on each side of the Mole Gap allows the invaders to pass through to London. Britain is left humiliated, its Empire lost. The story caught the public imagination. When reprinted it sold 80,000 copies and was translated into a score of languages. There was no immediate military response but in the 1880s forts were erected on Box Hill and Ranmore. Lord Ashcombe, owner of Denbies, provided the local volunteer force with land and funds for a drill hall. Though its notoriety arose from the concerns of its time – the birth of a unified Germany, the unfitness of the army, and the development of new means of transport and communication – the tale had a long life in public consciousness in both Britain and Germany. In the 1940s a German edition was issued to Hitler’s army under the title ‘Was England Erwartet’: What England Expects. [Dorking Museum website http://www.dorkingmuseum.org.uk/the-battle-of-dorking/ ]

In 1871 Lieutenant-Colonel George Tomkyns Chesney caused uproar with the anonymous publication in Blackwood’s Magazine of his story ‘The Battle of Dorking’. Chesney believed that Great Britain was unprepared for an armed invasion from Germany, especially after its victory in the Franco-Prussian War of 1870-71. The story is told in retrospect from 50 years in the future when a soldier recounts to his grandson the terrible events. Using a powerful new weapon (called only ‘fatal engines’) the German navy destroys the British fleet and soldiers land in Harwich. They march upon London and the final battle is at Dorking in the Surrey Hills. The British army is defeated. Germany takes control of Britain, and the Empire is disbanded. The reaction to the story was immediate. The British, having grown complacent with their military superiority, were horrified and the Government had to reassure the public that plans to review the army were already in hand. The story was published in a separate booklet and sold in tens of thousands throughout Europe. It also encouraged a host of sequels, including What Happened after the Battle of Dorking (1871), The Siege of London (1871), The Invasion of England (1882) and The Battle off Worthing: why the Invaders never got to Dorking (1887). Chesney’s alarmist story had catapulted the genre of future-war fiction into the public arena. [British Library https://www.bl.uk/romantics-and-victorians/articles/the-fear-of-invasion ]

It spawned a series of sequels and rebuttals: